Yoga and Your Hips, Part II 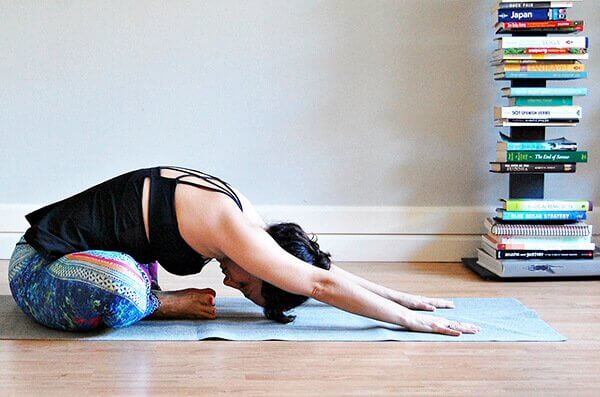 For more than a decade, I’ve quivered at the thought of attending a hip-opening workshop. Having played ice hockey and been a skateboarder for more 15 years, my hips were molten lead that no amount of Pigeon Pose could crack open. Now, 20 years in, I’ve chipped away and breathed steadily enough to be halfway comfortable and mobile in these joints.

As I step back and look at the challenges my hips presented, I finally realize that the issue wasn’t just hockey and skateboarding. Part of the problem was that I didn’t understand the joints or muscles that I was working with. I didn’t have a “map” of the region to make sure that I was stretching and strengthening all the muscles involved in the hip joint. I was overly focused on my outer hips and hamstrings, while ignoring my hip flexors and adductors. I didn’t understand the nature of the hip socket and that truly “opening” the hips requires a more intelligent, comprehensive approach.

I’m creating this guide because I know it would have helped me practice and teach more effectively years ago. This is the approach that I stick to when I’m working with my students and trainees—and, when I teach anatomy live and online. I’m hopeful that it will give you a simple framework for understanding your hip muscles.

Make sure to check out my Illustrated Guide to Yoga and Your Hips, Part 1. It describes the structure and ligaments of the joint and will help you understand the hip joint more clearly.  Part III provides you with a balanced sequence for strengthening and opening your hips.

And, remember, understanding the joint structure and muscles of your hip will make you a better sequencer! When you’re aware of all the muscles that comprise your hip, you can make sure that your sequences target all of the muscular compartments instead of focusing too heavily on the outer-hips and hamstrings like I did for so many years!

The Five Muscular Compartments of Your Hip

Quick caveat: I’m going to describe the muscular compartments of your hip as though they are each separate and solitary. I’m doing this because it provides us with a simple, foundational “map” of the hip muscles and their functions. In reality, there’s a lot of crossover between the muscular compartments. The compartments often help each other out and work together. For example, the adductors–especially the adductor magnus–assists the hip-flexors. Similarly, your external rotators often work with your abductors to adduct your hip. So, as you learn these compartments, keep your understanding basic and simple. But, remember that these muscle groups are often helping each other out.

Adductors: Your five adductors run from your pelvis (pubic rami) down the inside of your leg. Only one of them, your gracilis, crosses your knee. In yoga, these muscles limit postures that require your thighs to separate widely such as Baddha Konasana and Upavistha Konasana. All of the wide-legged standing postures like Warrior II, Triangle Pose, and Side Angle Pose do a good job of creating range of motion in this group. The adductors are strengthened in core-focused work.

External Rotators: Beneath your gluteus maximus, your six external rotators run from your pelvis to your thigh bone. The most familiar name in this group is the piriformis. As the name implies, these muscles primarily rotate the thigh bone laterally. The external rotators are the main muscles that most students feel when they do Pigeon Pose, Cross-Legged Forward Bend, and Ankle-to-Knee Pose. Restriction in your external rotators makes it difficult to sit cross-legged and can reduce your ability to do forward bends and seated twists. Strengthening this muscle group can help keep your sacroilliac region stable and maintain optimal alignment in this joint.

Abductors: Your abductors include your entire gluteal family (maximus, medius, & minimus), tensor fasciae latae and sartorius. These muscles run from the outside of your pelvis to the outside of your thighbone. When they contract, they either stabilize your pelvis, or pull your thighbone out to the side. Although they derive their name, “abductors,” from the latter (to take away), they’re usually working to keep your pelvis stable while you stand and walk. Outer hip openers like Pigeon and Gomukhasana stretch this muscle group. Standing postures—especially the top leg in Ardha Chandrasana—strengthen this group.

This drawing illustrates the pathway of your psoas. Ignore the fact that “major” and “minor” are both listed. These muscles contract strongly in postures like navasana and bakasana. They stretch in all of your backbends and lunges. 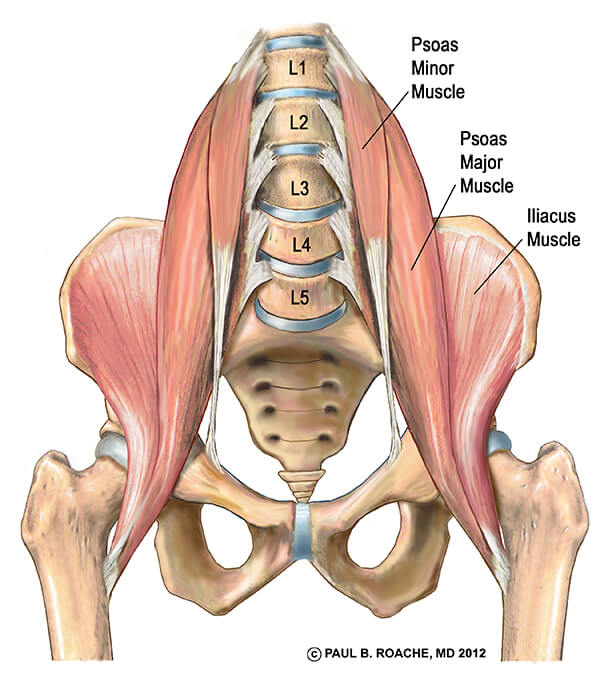 The rectus femoris is a “double-duty” muscle. It works with the other quadriceps (technically, it is considered one of the four quads) to straighten the knee. And, it works with the other hip flexors to flex the hip. Like the psoas and iliacus, the rectus femoris strongly contracts in most core strengthening postures and lengthens in all backbends. 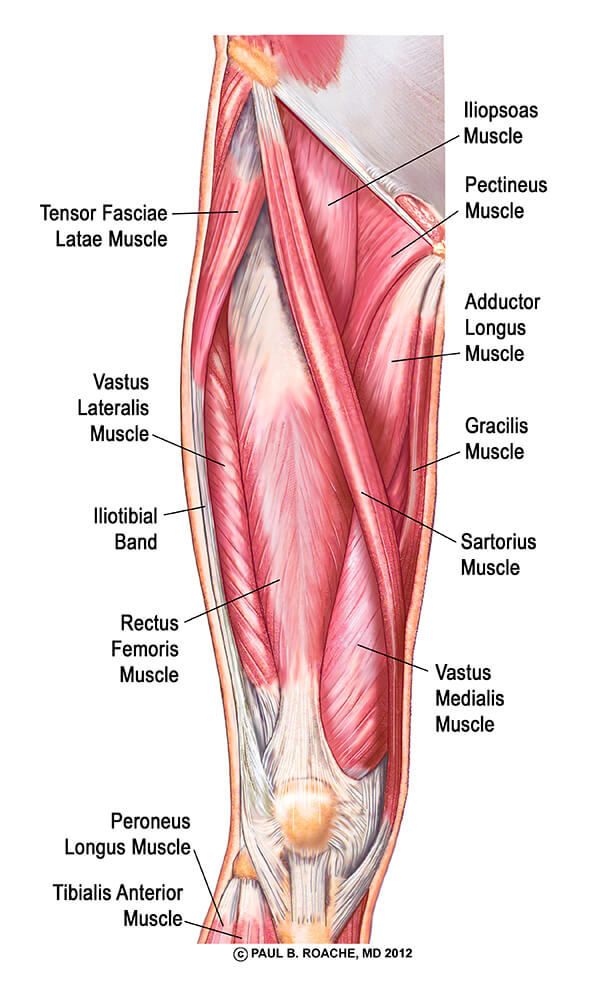 I included this illustration in my Illustrated Guide to Yoga and Your Core due to the adductors relationship to the core. Check it out here if you haven’t read it. This 3-D cutaway shows the adductors running between your hamstrings on the back and your quads in the front. You contract your adductors in core-strengthening work and you stretch them in all the postures where you separate your thighbones such as Bound Angle Pose, Malasana, and most standing postures. 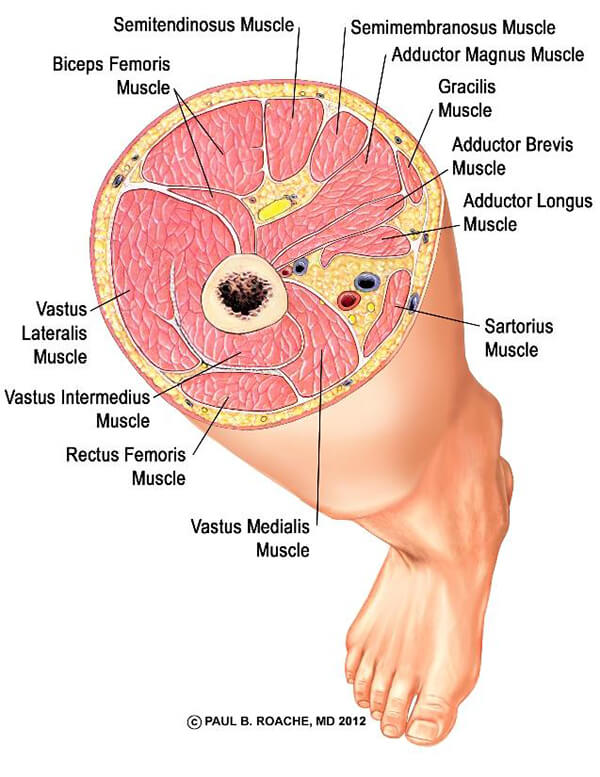 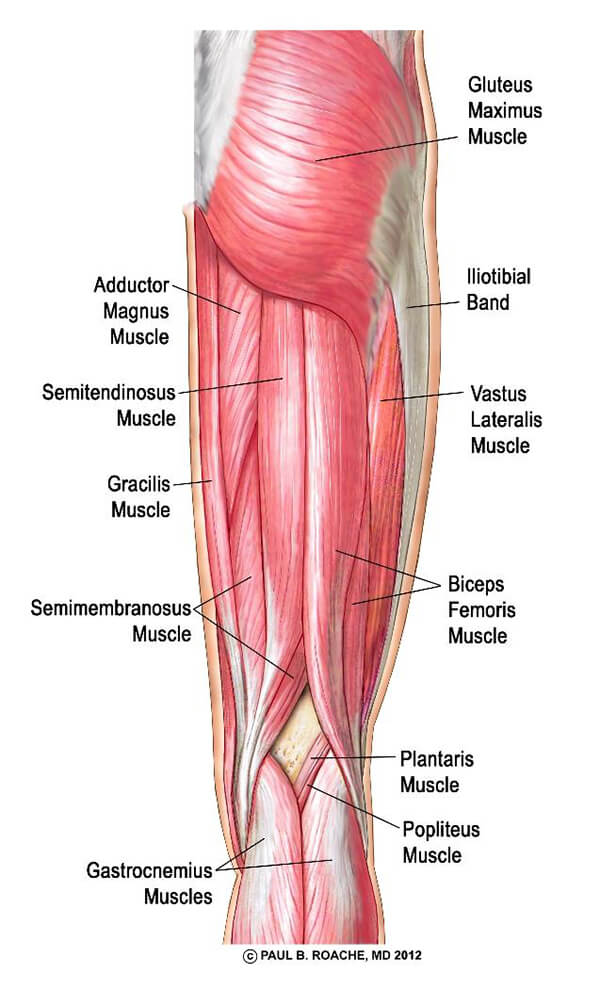 Your External Rotators and Gluteus Maximus

This is my favorite illustration in this series. The left side shows the gluteus maximus. On the right side, the gluteus maximus is removed from the illustration revealing the external rotators that live underneath the gluteus maximus. You can see how layered and dense this region is. You strengthen your external rotators by engaging them in standing postures and backbends. You also strengthen them in some of the transitions between postures in vinaysa yoga. You stretch these muscle groups in all Pigeon Pose variations and cross-legged forward bend variations. 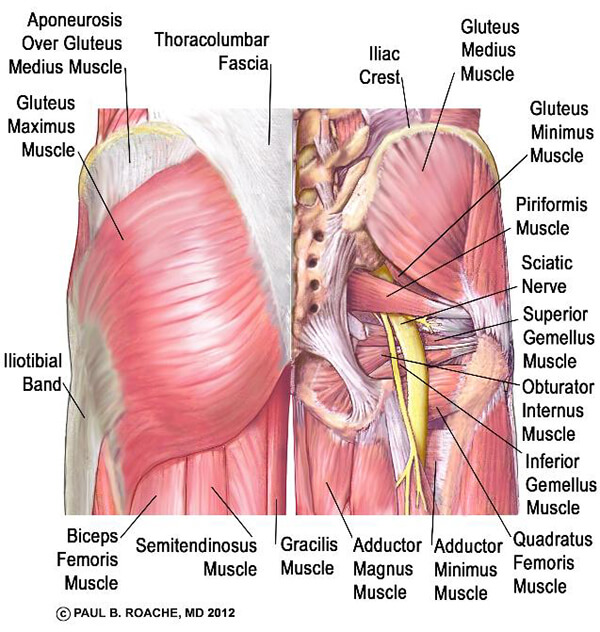 You can see your glutes, tensor fasciae latae, and sartorius in this illustration. In yoga, we have to make a concerted effort to strengthen these muscles since they don’t automatically engage in most postures except for standing balances. In Part III of this series, I’ll provide you with some cues that will help you work these muscles. You stretch these muscles in all outer-hip openers, like Gomukhasana and Pigeon. 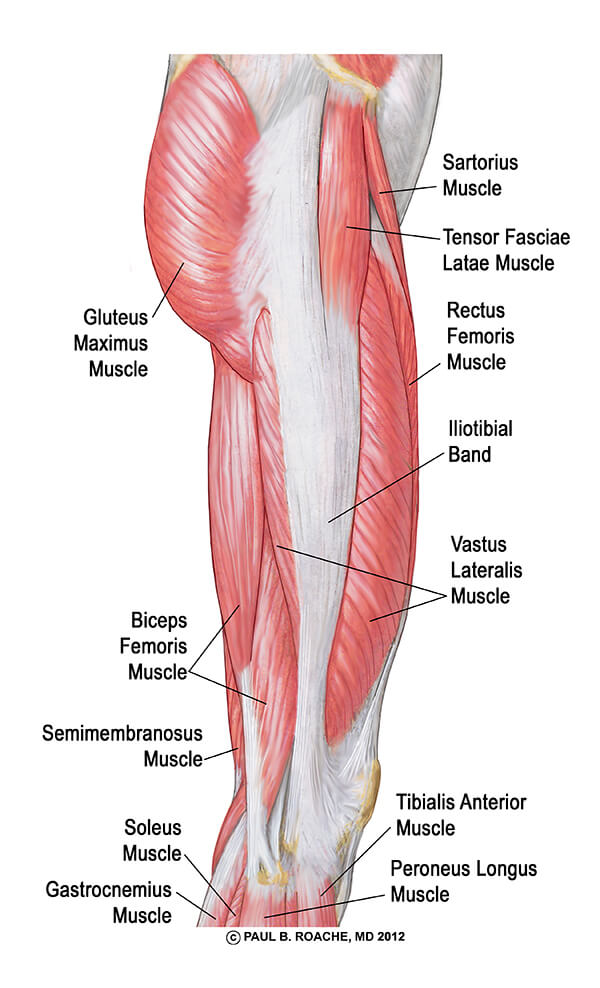 Thanks again for checking out this series! Be sure to keep in touch with me by signing up for our newsletter!

Want to practice this sequence at home?  When you sign up for our newsletter we’ll send you a free printer-friendly PDF of the sequence! If you sign up for Module I, when you login to our educational platform, Kartra, you will see this 👇 -- a six-part downloadable manual to...

END_OF_DOCUMENT_TOKEN_TO_BE_REPLACED Can online yoga teacher training be better than training in person?

In the past 15 months, I’ve taught over 700 hours of online trainings. Before that, I taught continuing education trainings for 10+ years. I've been...

END_OF_DOCUMENT_TOKEN_TO_BE_REPLACED

If you're considering doing a yoga teacher training online, you probably have a laundry list of attributes that you are looking for in the training....